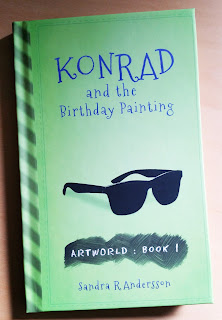 And we have a hardback edition! The proofs arrived yesterday and I only need to tweak the cover slightly (the stitches are too close to the edge), which I did this morning, so now I’m just waiting for the Ingram Spark inspectors to inspect the new files and then I’m going to click the ENABLE FOR DISTRIBUTION button and that will be that.
I have to say, I was thrilled to see the Createspace paperback, but this is an actual book! And Ingram Spark managed to get the colors right, which was impossible at Createspace, so this is now my favorite book. Perhaps I shouldn’t say that. It’s a bit like saying that one has a favorite child, perhaps. But right now this hardback edition of Konrad and the Birthday Painting is my very favorite book! There, I’ve said it.
This week I’m working on a different project (not a children’s book) but as soon as I’m done with that I’ll start editing Outside, the first book in the X/Y-series. (Which probably won’t be called that, once I’m done, but that is the working title.) I’ve finished a rough first draft, but need to think about how I want the rest of the series to be, before I settle on the final shape of the first book. The age of the protagonist is up for debate, for example. She’s only 10 right now, but that means that it will be a while before she can change the world, I think. I don’t want to do a Harry Potter and write books that age during the series, not after seeing how hard it is for my 8-year-old who is so eager to read the rest of the books after loving the first. The final books are just not suitable reading for a small child. My oldest son aged along with Harry so that was never an issue when the books were first released, but new readers that are discovering the books now have a tough choice to make. I don’t want to do that to my readers.
At the same time, it is inevitable that my protagonist(s) are going to age over the course of the series, and that is going to change the level of action and degree of scariness from book to book. I feel like this world could be the setting for books for children, young adults, and actual adults. Perhaps I should think about multiple series, aimed at different age groups? But when would I ever find the time to write all those books?
I don’t know. The only thing I’m sure of today is that whatever books I write will be published in a hardback edition! <3 <3 <3